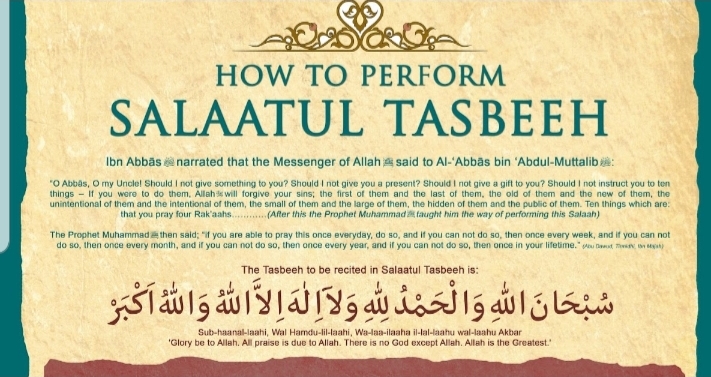 The prayer of glorification (salat al-tasbih) is a recommended prayer that the Prophet (Allah bless him and give him peace) encouraged performing as often as one can. It consists of four rakats and 300 glorifications (tasbih), 75 in each rakat.

One does likewise in the next three rakats, for a total of 300 Tasbeeh.

This is the description related by Imam Tirmidhi in his Sunan from Abd-Allah ibn al-Mubarak. It is related that the Prophet (Allah bless him and give him peace) said to his uncle, al-Abbas (Allah be pleased with him), encouraging him to perform this prayer, “… If you perform this, Allah will forgive you your sins–first and last, old and new, accidental and deliberate, minor and major, hidden and manifest… If you can perform this prayer daily, do so. If not, then weekly. If not, then monthly. If not, then each year. If not, then at least once in your lifetime.” Related by Tirmidhi and others. Most hadith masters accepted this as a sound hadith–and the jurists considered it a recommended sunna.

Ibn Abidin quotes one of the great scholars as saying, “No one hears of its great reward and then leaves it except someone lacking religious concern.” [Radd al-Muhtar] 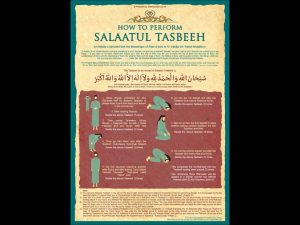 One Thought on “How to perform Salat al Tasbeeh”