Amongst the special Ibaadah of the month of Ramadan are the fasts and the Taraweeh salaah.

It is narrated by Abu Huraira (RA) he said: I heard Allah’s Apostle (Sallahu Alaihi Wassallam) saying regarding Ramadan, “Whoever prayed at night in it (the month of Ramadan) out of sincere Faith and hoping for a reward from Allah, then all his previous sins will be forgiven.” (Bukhari)

The Sunnah of Taraweeh according to most Scholars is that this prayer is to be performed in congregation (with Jamaah) and that was the practise of the Sahaba (RA), which Sayyidina Amirul-Mumineen Umar (RA) initiated.

The information below will be dedicated to the history of the number of Rakaahs of Taraweeh that have always been performed in the two holy Harams and in the Muslim world.

The Taraweeh Salaah During the Time of Rasulullah (PBUH)

It is therefore evident that Rasulullah  (PBUH) performed the Taraweeh salaah in congregation at least twice or thrice in his lifetime.

During the Period of Hadhrat Abu Bakr  (RA)

During this period, the Sahabah  (RA) meticulously performed the Taraweeh salaah individually or in small congregations.

During the Period of Hadhrat Umar  (RA)

During his Khilaafah, the second Khalifah Hadhrat Umar Faarooq (RA) combined all the small congregations into one because of the possibility of the Taraweeh salaah becoming Fardh no longer existed. With the approval of all the Sahabah  (RA), twenty rakaahs Taraweeh salaah was performed every night of Ramadan after the Isha salaah, followed by three Rakaahs Witr salaah. (Mu’atta Maalik, as quoted in Nasbur Ra’yah)

There are many people nowadays who perform the Taraweeh salaah with Jamaah throughout Ramadan because it was carried out during the time of Hadrat Umar (RA) with the consent of all the Sahabah (RA). However, these people object to the number of Rakaahs. If they keep the following Hadith in mind, their objection will Inshaa Allah be removed.

Rasulullah (PBUH) said, “I advise you fear Allah, to listen and to obey (your leaders) even though your leader be an Abyssinian slave, because those of you who live after me shall see great disputes. It is therefore compulsory for you to adhere to my practices and to the practice of the rightly guided successors (Khulafaa Raashideen). Hold fast to these practices and bite on them with your molars.” (Tirmidhi – Hadith 6272)

During the period of Hadhrat Uthmaan  and Hadhrat Ali (RA)

The Taraweeh salaah in the Masjid Haraam in Makkah

The famous book of Ahadeeth Jaami Tirmidhi states that according to the majority of scholars, the number of Rakaahs in the Taraweeh salaah is twenty, as reported from Hadhrat Umar (RA), Hadhrat Ali (RA) and other Sahabah (RA). This is also the opinion of Hadhrat Sufyan Thowri  (RA) and Hadhrat Abdullah ibn Mubaarak  (RA) and all four Imams of four madhhab. Hadhrat Imaam Shafiee  (RA) says, “I have seen the learned scholars of Makkah perform twenty Rakaahs of Taraweeh salaah.”

In the third century A.H., the famous historian of Makkah Muhammad bin Ishaaq Faakihi documented that during the month of Ramadan it was the practice of the people of Makkah to sit five periods of Taraweeh (rest periods between every four Rakaahs of the Taraweeh salaah. This denotes that they performed twenty Rakaahs of salaah. (Akhbaar Makkah by Faakihi)

It is therefore evident twenty Rakaahs of Taraweeh salaah has been performed in the Masjid Haraam of Makkah for the past fourteen hundred years. Throughout, this period, there has never been a single night when only 8 Rakaahs have been performed. 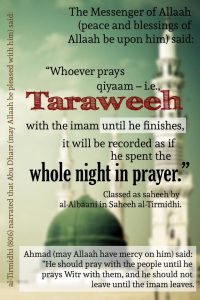 The heart-rending and beautiful Taraweeh salaah in both the Harams is broadcasted live throughout both on radio and television.

The soundness and correctness of the above narrations is supported by the very actions of the Sahabah . It was the nature of the Sahabah that without the order and permission of the Prophet (Sallaho Alaihe Wassallam) they would not perform any religious action. They would not create innovative practices in the Deen. It is this very same 20 Rakats Taraweeh that has been performed from the time of the Sahabah to the present day in congregation in the month of Ramadan. This form of worship has been passed down from generation to generation and safeguarded to this day. The strength of these Ahadith is established from the Khulafa Rashideen and Sahabah , Scholars of Hadith, Jurists and Mujtahideen of this Ummah, as well as the very practice of the Ummah itself.

The first Fatwa on 8 Rakaah

The first person who gave fatwa of 8 Rakaat Taraweeh was Mufti Muhammad Hussain Bitalawi of Indian Subcontinent. In 1285 AH, he gave fatwa that taraweeh Salaah should be 8 Rakats and not 20 Rakats. In Arab world, Shaykh Nasir Uddin Albani wrote a book called ‘Tasdeedul Isabah’ in 1377 AH. In this book, he tried to prove that Taraweeh is 8 Rakats and not 20 Rakats but he could not provide any evidence from the sayings of Sahaabas, Tabi’ees, Imaams or any Faqeehs.

Twenty Rakaahs Taraweeh salaah is the practice of Sahaabas, Tabi’ees, all four Imams and it is being performed from the first century of Islaam up to this fifteenth century.

From the above quotations of the books of jurisprudence written over the centuries we learn that all 4 mazhabs, Hanafi, Hambali, Shafi and Maliki agree that Taraweeh is not less than 20 rakaats. The only difference being that Imaam Maalik is of the opinion of 36 rakaats. He used the proof that the people of Madina used to perform 36 rakaats.

Imaam Nawawi in his Kitabul Majmoo Sharah Muhazzab vol.3 pg.527 explains: “Our Ulama say its reason is that the people of Makkah used to make 1 tawaaf between every two tarweehas i.e. between every four rakaats and thereafter perform 2 rakaats and they did not make tawaaf after the fifth tarweeha. The people of Madina intended to equal them and they read four rakaats in place of every tawaaf. Hence they increased 16 rakaats and made 3 witr thus making the total 39.”

The 20 Rakats Taraweeh prayer is a Sunnah Muakkadah – Those who reject it, go against the Sunnah and the consensus of the Sahabah.