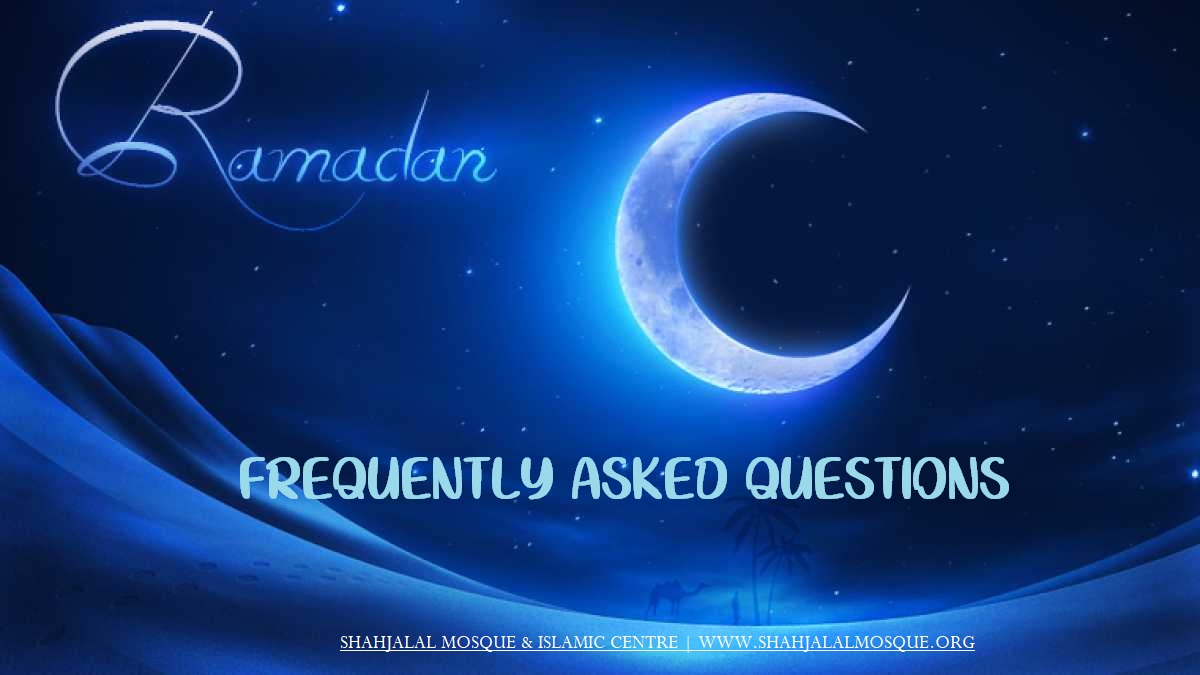 Q: Count some of the excuses which permit one to not to fast in Ramadan.

A: Every Muslim who is able to fast has to fast Ramadan. It is permissible for a sick person, pregnant woman or breast-feeding woman who cannot tolerate the hardship of fasting to break the fast. Each one of those has to make up the missed day (Qada’).

Q: Is it obligatory to make the intention for fasting?

A: Yes, one has to make the intention for each fast. One intends to fast at any time between after Maghrib and before the Fajr of the day of Ramadan.

Q: Does the occurrence of insanity or losing consciousness on the day of Ramadan invalidate fasting?

If anyone does any of the following acts deliberately, it will invalidate the fast and require a makeup along with expiation:

*It is impermissible and a grave crime to engage in sexual intercourse from the rear private part whether in Ramadan or out of Ramadan.

Q: A person had eaten or had intercourse on the day of Ramadan. What is the judgement on that deed which he did?

A: One invalidates the fasting of a day of Ramadan by eating or drinking or making a sexual intercourse, if done wilfully, remembering that he is fasting, he has committed a major sin and has to make up that day after Ramadan. He also has to perform a kaffarah (Expiation) which is:

To free a Muslim slave who is not defective, if unable, he has to fast sixty consecutive days in the year without any interruption.

If one is genuinely unable to perform the sixty consecutive fasts based on reasonable surety, then one must feed either the same sixty poor people to their fill for two meals or feed one poor person to his fill for two meals every day for sixty days.

Q: What are the things that invalidate the Fast and Requires Makeup (Qada) only?

The person who involved himself in the above-mentioned situations should refrain from eating, drinking, and sexual activity for the remainder of that day, as well as repenting for the severity of the sin.

Q: Physical Contact with spouse that does Not Vitiate the Fast But Is Prohibitively Disliked and Sinful:

Kissing, touching or doing anything with desire in which one fears falling into intercourse or ejaculation.

Q: Can a person who has made intention at night to fast, eat and drink before Fajr begins?

Those who want to fast, must stop eating and drinking from the beginning of Fajr. For this reason, a person can also eat and drink until Fajr starts, even after he makes intention at early night.

Q: In Sahur (Sahri), can we keep eating and drinking until the recitation of the adhan ends?

A person who eats and drinks in the time of sahur should stop eating and drinking – no matter whether the adhan is being recited or not – by the time Fajr begins.

Q: How can a person who always travels due to his job keep fast?

Islam orders those who cannot fast due to illness or journey to redeem their fast after Ramadan. As long as excuses are present, permission is available as well. However, it is more virtuous to fast for those who do not have difficulty on journey as it is mentioned in the Qur’an.

Q: Does having a wet dream while asleep harm the fast?

Q: Can a person eat the meal of sahur while he is junub (impurity after intercourse), and can he intend to fast in such a state?

It is permissible for him to have the meal of sahur after washing his hands and mouth and make intention for Fast while in the state of Janabah. However, it is important to do Ghusl (bath) as soon as possible.

Q: Does eating or drinking forgetfully invalidate the fast?

Eating and drinking forgetfully does not break the fast. A person who eats and drinks forgetfully should bring out what is inside his mouths and wash his mouths when he remembers he is fasting and he should complete his fast.

Brushing teeth does not invalidate the fast. However, swallowing toothpaste or water invalidates the fast. Considering the possibility for the fast to be invalidated, teeth should be brushed before Fajr begins and after iftar. Brushing with a miswak doesn’t harm the fast.

Q: Does vomiting invalidate the fast?

Vomiting out of control (unintentionally) does not invalidate the fast. This is on the condition that the person did not swallow any of vomit or any of his filthy saliva while being able to avoid that. However, vomiting full mouth, intentionally invalidates the fast.

Q: Does getting blood drawn invalidate the fast?

Getting blood drawn does not invalidate the fast.

Can women fast in menses and after childbirth bleeding?

Women cannot fast in menses and after childbirth bleeding. They must make up their fasts they could not keep.

Q: Is it religiously permissible for women to use medicines that delay menstruation in Ramadan?

The fasting observed is valid despite being due to medication since the menstruation does not happen. However, using medicines that delays menstruation is not recommended.

Q: At what age must a child begin fasting in Ramadan?

Q: How do we determine puberty?

Q: Does inhaling smoke from hot food or from bukhoor break the fast?

A person should not inhale bukhoor (incense) or the steam coming out of the cooking pot because these have particles which may reach his stomach. If the smoke of bukhoor or steam from the cooking pot reaches the throat, the day must be made up if it reaches it through inhaling deliberately. But if one of them reaches the throat without him wanting it to, then he does not have to make the fast up. There is nothing wrong in smelling good smells from food, perfume etc.

If a fasting person needs to taste the food whilst fasting, there is nothing wrong with that, and it does not affect the fast so long as none of the food enters the throat of the fasting person. If he tastes it without any need to do so, this is Makrooh (disliked).