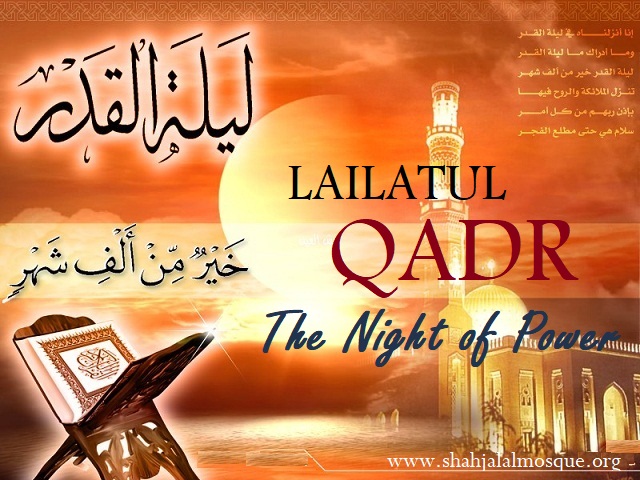 Abu Hurayra (Allah be pleased with him) narrated that the Prophet (Allah bless him and give him peace) said, “Whoever prays on Laylat al-Qadr out of faith and sincerity, shall have all their past sins forgiven.” [Bukhari and Muslim]

Abu Sa`id al-Khudri (Allah be pleased with him) narrated that the Prophet (Allah bless him and give him peace) also said, “Seek it in the last ten days, on the odd nights.” [Bukhari and Muslim]

The scholars have affirmed that it is the best of nights, because of Allah Most High’s words,

“Lo! We revealed it on the Night of Power.

Ah, what will convey unto thee what the Night of Power is!

The Night of Power is better than a thousand months.

The angels and the Spirit [Jibril] descend therein, by the permission of their Lord, will all decrees.

(That night is) Peace until the rising of the dawn.”

Given the tremendousness of this night, it is recommended to seek it out, and to worship Allah in it, with prayer, supplications (du`a), remembrance of Allah (dhikr), and other acts of worship. [Ibn Abidin, Radd al-Muhtar]

Because obligatory acts are more beloved to Allah than supererogatory ones, the most important thing for men is to pray both Isha and Fajr at the mosque.

When is Laylat al-Qadr?

There is a long standing difference of opinion about when Laylat al-Qadr is, because it is of those matters whose certain knowledge has been lifted by Allah Most High from this Ummah, for the wisdom that people strive to seek it:

May Allah give us the success of following in the footsteps of the inheritors of the Prophet (Allah bless him & give him peace), outwardly and inwardly, and may He make us of those whom He loves.

This is one of the many reasons why one should strive to establish the night vigil prayer (tahajjud), daily.

Imam Sarakhsi mentions in his Mabsut, that the position of most of the Companions (Allah be pleased with him) was that it is on the night of the 27th.

This year 27th of Ramadan falls on Tuesday, 12th June 2018. There will be special activities at Shahjalal Mosque & Islamic Centre in the night before Tuesday including, Dhikr, Du’a, Talks etc. Both Iftar and Sehri will be provided at the Mosque.

, the mother of the believers and the beloved wife of the Prophet

asked the Prophet (Sallallahu Alaihi Wa Sallam: O Messenger of Allah, if I witnessed the night of decree, Laylatul-qadr, then what du’a should I make?