Hafiz Mawlana Syed Fazlur Rahman (R.A) was born in 1st of June 1944 in a prestigious family in the Village of Pir Nogor in Zakiganj Upojila under the district of Sylhet in Bangladesh. He is the descendant of a missionary Muslim Sufi preacher, Syed Foyez Ali Shah (R.A), who arrived in Pir Nogar, Zakigonj, Bangladesh from his birth village of Al-Minufiyahnum, Baghdad, Iraq. He travelled to Bangladesh with the instructions for aiding the spread of Islam by his teacher Khwaja Fariduddin Mas’ud Ganjshakar, a world-renowned Sufi saint and a Muslim missionary from the Chishti order and practitioner of “The Chilla”, which is a spiritual practice of penance and solitude in Sufism.

Syed Foyez Ali Shah, was asked by his teacher to search lands across India to find a place and observe the Chilla. He observed Chilla for 40 days and nights, in meditation and remembrance of Allah. Until today the village is named after him as Pir Nogor (Village of the Saint), before this it was called Kusharkul. His grave is in the middle of this Village (same place as his Chilla). This is still visited in reverence by the progenies of his followers (Murids). Syed Foyez Ali Shah is the descendant of the Prophet Muhammad (saw) through the linage of Al-Ashraf Sayyid families in Iraq.

Syed Fazlur Rahman, is also a descendant of a Scholar from his Mother, Badrun Nessa Chowdhury’s side. His mother was a devout woman, her father Firuz Ali Chowdhury was also an Islamic Scholar. He took part in the Second World War and was posted in Iraq by the British Empire. Later, he took part during the independence struggle of India, for this he was jailed by the British Administration. After the independence of India, he travelled with Hadhrat Allamah Abdul Latif Chowdhury Fulati Saheb Qiblah (R.A) to study the under Hadhrat Shah Yaqoub Badarpuri (Hatim Ali Saab) (R.A) in Badarpur, India, who was a famous Sufi Master in Chishtiah, Qadiriah, Naqshbandiah, Mujaddadiah and Muhammadiah Sufi tareeqah.  He is well known in Assam and Sylhet area.

At the age of seven, Syed Fazlur Rahman started his Hifz journey. He studied under Mawlana Abdul Jalil of Matiura, Beanibazar and Isapur Madrassah under Hafiz Mawlana Abdul Goni, where he completed his Hifz at the age of 12. His father Mawlana Syed Azizur Rahman was filled with joy that his son had become a Hafiz, so he decided to organise a Mahfil to rejoice his accomplishment.

His father invited several pious scholars and local renowned scholars that included Mawlana Noor Ali Saab, Mawlana Bodorpuri Saab and Luqman Hafiz Saab. On the same day of this occasion, his father departed from this world.

After his dad passed away, he was employed by a masjid in Kolasora, Zakigonj as an Imam, where he was earning five Taka per month salary. At that time, he was 14 years old. To test his knowledge of hadith, a person approached him and asked him about a ruling. He could not answer the person’s question fully, which got him frustrated and disheartened. In the morning, he went back to the committee and told them that he wants to leave and go to Madrassah to study Alimi course to gain his knowledge of Qur’an and Hadith.

The committee at the masjid tried to persuade him to stay but he was adamant that he wanted to go to the Madrassah. They knew his circumstances as his father had passed away and he was the only breadwinner in his family and had younger siblings to look after. They offered to continue his wages whilst he went away to study Alimi course. Later that year he was transferred to Gasbari Madrasah, Kanaighat for his final year to complete his Dhakil course. He first went to Umarkali Madrassah, Kanaighat where he studied for further three years.

The following year, he went to Sylhet to study at the age of 18 years. He enrolled at Sylhet Government Alia Madrassah to study the Alimi course. He was made the chair of the student union. At the same time, he was appointed as the Imam of Jalopara Masjid, Kodomtoli, Sylhet. In the early evenings, he taught children the Holy Quran privately. In conjunction with his Alimi course, he enrolled at Modon Mohon College, Sylhet to study English in the late evenings.

After he finished his Alim and Fazil class in Sylhet Govt. Alia Madrasah, he went to Dhaka Government Alia Madrassah to complete his Kamil (masters in hadith) and to attain the honours of Mumtaz Ul Muhadditheen, highest Islamic scholarly achievements for teaching of hadith. During his Kamil course, he started a diploma in general studies at Dhaka University. While he was living in Dhaka, he was the Imam of the masjid in the Students hostel. He returned from Dhaka after two years. After he graduated from Dhaka, his spiritual leader, Allamah Abdul Latif Chowdhury Fultali Saab (RA), appointed him as an Islamic Studies teacher at Aushkandi R.P High School, Nabiganj.

His teacher and former principal of Sylhet Alia Madrassah, Allama Abdul Latif (District Education Officer) suggested him a position for him at Dilruba High School Norial, Jassor as an Islamic studies teacher. From there, he was reposted to Barishal, then to Chittagong and then back to Zakigonj Government High School, where he taught for further 10 years.

He was recommended for the position of Imam at Shahjalal Mosque Manchester, by his teacher and spiritual master Hadhrat Allamah Abdul Latif Chowdhury (Fultali Saheb Qiblah) to then the Chairman of Shahjalal Mosque, Manchester, Late Alhaj Abdul Matin Chowdhury. As his final career destination, he served Shahjalal Masjid and community for 30 years, from 1981-2011.

Hafiz Mawlana Syed Fazlur Rahman accepted the community of Manchester as his family. He was very eager for the betterment of the community. He took initiatives to teach the Quran to elders, those who did not get the chance to learn the Quran or forgot it because of the distance from the Quran. He established the regular `Khatme Khajegan Mahfil’ at Shahjalal Mosque. He started Hifz class for the adults and children and because of his inspiration and encouragement, many of them took the path of the Qur’an. He also helped establishing Qirat & Tajweed course at Shahjalal Mosque and continued giving his time and effort for that course, even after his retirement from the Mosque.

Hafiz Mawlana Syed Fazlur Rahman Saheb had been blessed with the opportunity to study Qur’an, Hadith, Fiqh, Aqaid and other Islamic sciences under many famous Islamic scholars of Indian sub-continent. All of these scholars have chain of transmission (sanad) from the holy Prophet Muhammad (SAW).

Some of his notable teachers are:

He also studied and received Ijazah of Qirat and Tajweed from his spiritual guide Hadhrat Allamah Abdul Latif Chowdhury Fultali Saheb Qiblah (R) who had three unbroken chain of transmission (Sanad) go back to the Prophet Muhammad (SAW).

He had been taken ill and admitted into hospital on Wednesday 22nd of February 2017. On Friday, he was informed by the doctor he does not have much time left at which point his health deteriorated and the family had been advised to be with him. He stayed conscious, relaxed and maintained recitation of the Qur’an and did dhikr with his family. He recited with his family Durood Shareef, Surah Yaseen, Surah Mulk, Durood Taj and Durood Tunajjina. He lifted his hands and did dua for each family member one by one and said his final good-bye’s. Around 12:45 am he asked for time and showed his eagerness to pray Tahajjud. He did Tayammum by himself without any help and prayed Tahajjud. After that he requested to open the door, lower his bed and to help him turn towards his right. All had been done upon his request. At that point he opened his eyes and started reciting, ‘Assalaatu Assalaamu Alaika Ya RasulAllah, Assalaatu Assalaamu Alaika Ya HabeebAllah’. Talqeen of Dhikr was given to him and he was doing the dhikr with Talqeen. His faced lighted with Noor, while doing Dhikr of Allah, his blessed soul departed from this Dunya at 12:55 am on 25th February 2017.

Manchester is his last resting Place

He was asked on the day he passed away his final wish as to where he should be buried. He replied, ‘keep me in view of everybody’. So he was asked, ‘in Manchester?’ And he said, ‘Yes’.

He loved his community in Manchester, and wished to remain close to them even after his departure. He is buried in southern Cemetery in Chorlton, Manchester.

May Allah Subhanahu wa ta’ala forgive his shortcomings, grant him a high rank in Jannah and resurrect him in the company of His chosen people. Ameen 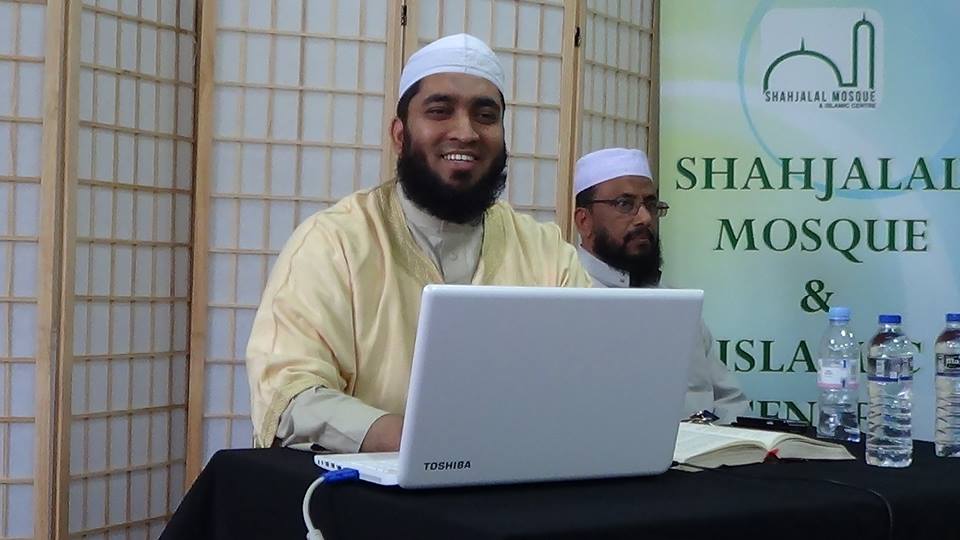 Mawlana Khairul Huda Khan is the head Imam and Khatib of Shahjalal Mosque and Islamic Centre since April 2009.

Imam Mawlana Khairul Huda Khan was born in the village Sirajpur in Zakiganj Upojila under Sylhet District in Bangladesh. His father Mawlana Abdus Salam Khan was a prominent ‘Alim who spent his life in service of Islamic knowledge as a teacher, in different Madrasahs across Sylhet Region.

He also studied Sociology in Shahjalal University of Science and Technology in Sylhet, Bangladesh.

Mawlana Khairul Huda Khan completed his Qirat and Tajweed studies in 1998 under the guidance of Allamah Fultali Saheb Qiblah (R.A) and received the Sanad of Qirat from him, who had three unbroken chain of transmission (Sanad) in Qirat from the holy Prophet (SAW).

Mawlana Khairul Huda Khan started teaching of Qirat after receiving his Ijazah in 1999. He was a part time teacher at Fultali Kamil Madrasah, Fultali Pre-cadet School and Sylhet Al Quran Memorising Centre in Bangladesh until before he moved to the UK in 2008.

Mawlana Khairul Huda Khan edited and published many Islamic magazines in Bangladesh. His published books are: